THE POINT PERON DEAL – 6 questions for the Premier 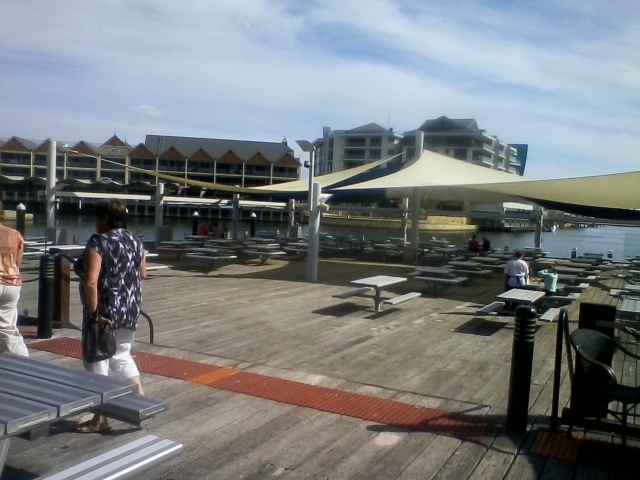 The deception starts with the name, “Mangles Bay Marina”.  This is a highly controversial canal development proposal in Rockingham, Western Australia, a partnership between the state government’s development arm LandCorp and the big residential developer Cedar Woods.

Anyone just tuning into the spruikers spin and crony media reports would be immediately swept away with a Utopian mental image of some “vibrant” and “exciting” boating marina, buzzing with tourists, busy cafes and hotels and all the action igniting a booming local economy.  One might image Fremantle’s Fishermans Wharf on busy public holiday weekend.

Well, that’s the sales pitch and as we all know, behind every pitch the realities are often disappointing or worse.  You know, the burger that doesn’t actually look like the one in the ad.   The marina in Mandurah certainly has not proven to be a big attraction, as you can see from the image above.  What they are avoiding to highlight is that this development is predominantly a dirty great canal housing estate. An exclusive private housing estate in the middle of a beautiful public reserve.

If canal housing estates are a good, you would think that it would be a big part of their plugs?  But no, the housing estate factor is avoided almost completely in all media. Why?  Perhaps it is because canal developments have a history of being fraught with expensive problems?  Perhaps, it would draw attention to the fact that public reserved land is actually being sold off to private interests?  Perhaps it makes it look like a deal that will make millions for the private developers?

The ironical thing is that Cedar Woods are not actually obliged to build the boating pens, cafes or hotels and other “marina” infrastructure that they are spruiking.  Looking at the information available on the development, they don’t have to do much more than dig the holes, carve up the blocks and sell off  the land (300-400 blocks)? It looks like investors will have to be found to build the marina side of the development.

What does LandCorp do?  According to Town Planner Greg Smith “LandCorp is a child of Brian Burke.  The idea was, that corporate organisations were not doing what was needed for the state, so we (the citizens of WA) needed an entrepreneurial state government to “kick start” developments.  It sounded like a good idea at the time, so we ended up with LandCorp  and very quickly a corrupt government and WA Inc.  Remember Burke and David Parker (both Labor) and Ray O’Connor (Liberal) all spent time in jail for corruption.  Given its role in government we now have Caesar judging Caesar and the “best” development opportunities often involve the “theft” of public land.  Think Perry Lakes, Perth Esplanade, Trinity Playing Fields.  For those with a longer memories, remember the public owned railways land in Albany , Bunbury and Geraldton.  The theft of port land in the heart of Fremantle only fell over because ING could not make enough money from it.  LandCorp is not the whole problem, but it is a very significant part of the problem.  Our system of government needs checks and balances and although the checks and balances are very weak they are better than none at all.  LandCorp undermines the weak checks and balances.”

This development raises many serious questions that West Australians who own this land should be keen to know the answers to.  Here are 6 we have asked the Premier and relevant Ministers;

1. How much will the developers (Cedar Woods) be paying for the Point Peron land?

Stuart Duplock the CEO of  Cedar Woods says he doesn’t know?  Apparently that still has to be decided by LandCorp and Cabinet?  Are we to be taken for fools?  Cedar Woods is in partnership with LandCorp on this development, as if they would spend all the money and time they have on this proposal so far without having a very good idea of what they are paying for the land.

At first glance one may assume that there must be some sort of a deal here, where Cedar Woods gets the Point Peron  land in return for building a “vibrant” and “exciting” marina/tourist precinct?  However, if you delve beyond the glossy innuendos and marketing spin, there doesn’t actually seem to be any obligation for Cedar Woods to do anything other than dig the hole, carve up the blocks and sell them off?

So will the Premier  please clarify exactly what Cedar Woods will be obligated to build ?

2. Through what process did Cedar Woods get in on this Point Peron deal anyway and why didn’t it go to tender?

3. Why won’t Cedar Woods release their so called “Mangles Bay Economic Study” which forecasts $1.3b in economic benefits to Rockingham over 2O years?

This study is being used widely to sway public opinion on the development.  It is also very misleading that they constantly refer to the development as a tourist precinct and marina and avoid calling it a canal housing development.  If the numbers add up in this study they should be happy to promote them?

4. Who was on the EPA decision making panel for the Mangles Bay Marina?

Given that the EPA are being taken to court over their approvals processes for James Price Point, you would think a little transparency would be in order.  Hans Jacobs has directed me to the website to see who is on the board.  Can I assume it was the board who made the decision or was it just Paul Vogel again?

Should this development go ahead and problems occur, as they have with Port Geographe (the government has announce it will have to $28m to fix it, see Millions to solve Port Geographe seagrass problems and Westpac felled by stinky town ), will Cedar Woods, the City of Rockingham or taxpayers (the state Government) pay for it?

Or would the new canal land owners (300-400?) get a private jetty on top of the 500 marina pens?  Because it seems the EPA have only considered the traffic and contamination of 500 moored boats in the development.

Point Peron was given to the people of WA by the Commonwealth in 1964.  In 1968 it was confirmed that it was strictly for the purpose of “RECREATION” (see attached).  Clearly, the idea was that this land was to be used as a special reserve, the Kings Park or Rottnest of the South for all to enjoy.  Given the growing population and urban sprawl that has gone on in the southern suburbs, they definitely need this natural reserve in its entirety for quality of life and nature tourism.  Tearing up this agreement would be a breach of faith by the WA State Government. 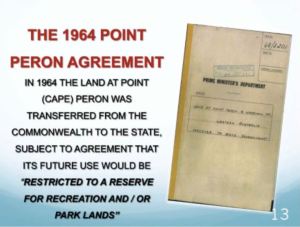 More on the issue;

Canal developments are banned in NSW and Victoria, because of their adverse economic and environmental impacts.  How can the government possibly propose doing another one, knowing how risky canals are?  Let us not forget that the EPA also approved this Port Geographe development.

There have been over 50 grounds for appeal on the EPA’s approval of the Mangles Bay Marina, from at least 19 people, some high ranking scientists.  I must warn you, that the EPA is fast losing all credibility.  40 hectares of Bush Forever will be destroyed and a boating channel will have to be dredged through the shallow seagrass marine nursery in Mangles Bay.  You don’t need to be scientist to know that if you dig out all of that land and fill it with sea water, it will affect the fresh water aquifers in the area and neighbouring Lake Richmond with rare Thrombolites.

Rockingham already has a fully developed foreshore/cafe strip and tourist industry?   The local businesses in Rockingham are already struggling like everywhere else.  The only reason Hillarys Boat Harbour is busy, is because there is virtually nowhere else in the northern suburbs to go.  Existing businesses on the Rockingham foreshore do not need or want another precinct built 1 kilometre down the road in Point Peron to go into competition with them.  Hillarys may appear busy on weekends, but many businesses there are not doing that well as it very quiet during the week.  How would Hillarys’ business owners feel if someone wanted to build another tourist precinct 1 kilometre down the road from them?

What the Rockingham community wants is boat pens!  How did a need for boat pens turn into a canal housing estate and need for a Hillarys style marina?  Another 500 boat pen marina called Port Rockingham has already been fully approved by Council, the EPA, the local community and environmental groups right off the foreshore cafe strip at the bottom of Wanliss Street.  This is a sensible location for a marina, it would be in the sea for a start, where marinas should be.  Building a marina there would give the community the 500 boat pens it needs and a new attraction for the existing foreshore tourist precinct.  This would transform the foreshore into a Hillarys style marina by incorporating the existing cafe strip, shops, with the beach etc..  This makes far more sense.

Unfortunately, the developer for Port Rockingham ran into financial problems.  But it is important to note that they have been searching for investors but so far have not found any.  This raises the question,  how will LandCorp be able to find investors to build the 500 boat pens in the Mangles Bay Marina?  Perhaps the return of 500 boat pens x circa $5k (hire per year) isn’t such an attractive return?  Let’s face it in times of economic down turn the boat is always the first thing to go.

It is ridiculous to say that a fake inlet marina/canal housing development would be a tourist destination.  Who wants to see a stinky canal housing development? Even our Minister for Tourism says tourists want nature  not man-made attractions.  Point Peron has been neglected (as public land often is when greedy developer are conspiring to get hold of it).  But is still has excellent bones, with stunning beaches, trees and bushland. It should be given a face lift and turned into a wonderful regional coastal park.

The opportunity cost of not doing this would be a terrible sacrifice for our state.  Imagine if Rockingham had a foreshore marina and a beautiful regional park, with great cycling and walking paths, affordable camping and caravan park, snorkelling, fishing, nature reserve, a big nature play ground, picnic and BBQ areas etc..?  That would be worth visiting.

This development must be stopped and CANAL DEVELOPMENTS MUST BE BANNED IN WA as well.

It seems to me that this State Government is spending far too much time and money on the high flying boating/marina lifestyle set, when we desperately need light rail and other disadvantaged groups are going without.  See Troy Buswell’s media releases  for the 28/05/13.

Point Peron is the “Jewel of the South” and must be protected for all West Australians now and forever.