Councillor Chris Cornish from the City of Bayswater has submitted a motion to be debated at the next council meeting on the 23rd of September.  It relates to increasing the tree canopy in the City from 13.2% to ‘20% by 2025’ to reduce urban heat  See YouTube video 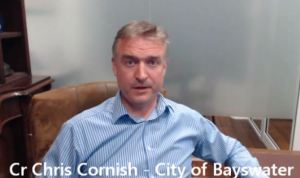 Chris asks those who would like to support the motion to contact the Mayor and Councillors before the meeting;

(Include your full name and full address)